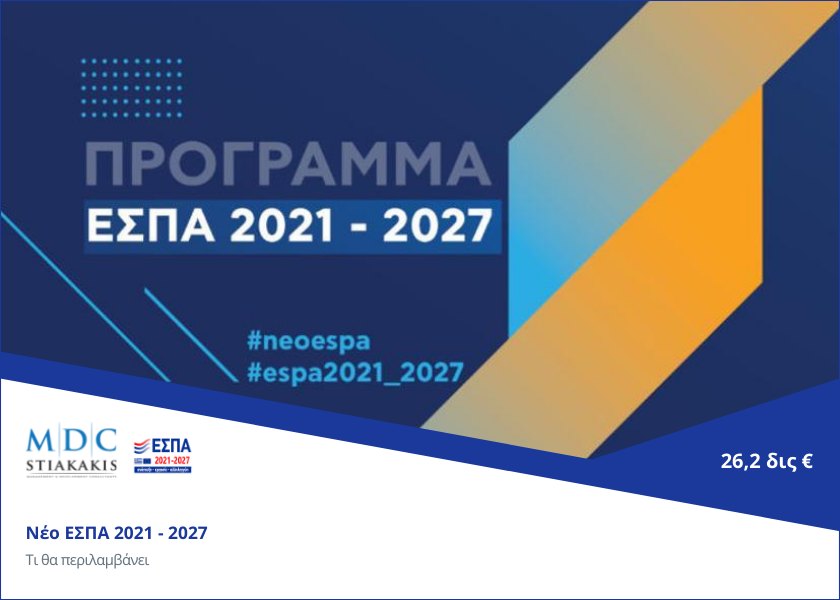 Information on the programs that will run first, the sectors, the selection criteria and the resources for 2021 is given by the secretary general. Of Public Investments Dimitris Skalkos in an interview on in.gr and tanea.gr:

The new NSRF for the period 2021–2027 is in the process of implementation, with the total public expenditure of the new Programs amounting to approximately 26.7 billion euros, while the total Community participation is estimated at 21.2 billion euros.

The Regional Programs remain in the new period 13, while all are significantly strengthened in their financing, from 17% to 85%. It is noted that now 1/3 of the total resources for the period 2021-2027 are distributed to the Greek regions in an effort of the government to reverse the heavy imprint of the crisis and the intensity of intra-regional disparities.

Agri-food and tourism will be among the sectors that will be integrated, but other sectors will also have increased funding opportunities, such as logistics, recycling, renewable energy sources.

To the known Programs of the current programming period are added new Programs for Civil Protection, Fair Transition, an autonomous and horizontal Program for Digital Transformation, while the Transport Infrastructure and Environment and Energy Programs are separated.

Priority Innovative and Smart economic transformation for extroversion and competitiveness. Emphasis on Industry 4.0, the Clusters of small and medium enterprises, the improvement of employees' skills (in-company training), the development of mechanisms to support innovative entrepreneurship.

Emphasis on the digital transformation of the public sector and the development of the country's digital infrastructure.

Priority is given to investments in sustainable, smart and multimodal transport infrastructure (roads, ports, railways) as well as the renewal of a means of transport fleet.

Priority is given to the implementation of the European Pillar of Social Rights. Emphasis on active employment policies (where Greece is the tail), actions against poverty and social exclusion, a comprehensive strategy for vocational training and education, actions on public health, mental health, social inclusion.

It concerns the areas that are in the process of detoxification from lignite (Western Macedonia, Megalopolis) as well as the energy needs of the islands.

The Regional Programs remain in the new period thirteen, while all are significantly strengthened in their funding, from 17% to 85%, depending on their special needs. It is noted that now 1/3 of the total resources of the period 2021-2027 are distributed to the Greek regions in an effort to reverse the heavy imprint of the crisis, the intensity of intra-regional disparities and to take advantage of the untapped productive potential of our regions.

The proposed distribution is as follows:

Which programs will run first?

The aim is to achieve the simultaneous approval of new programs before the autumn of 2021. From there on, a series of actions will be carried out to strengthen business liquidity and support employment, such as well-known financial instruments (such as the TEPIX, the Guarantee Fund, the repayable advance, the subsidy of interest on up-to-date loans) that "ran" in the previous months, but also a series of new ones that are scheduled to be announced in the coming months. As their eligibility has started from the beginning of the year, there will be no gap between these two programming periods for these actions.

In which sector will the main weight be given?

The priority, as Mr. Skalkos mentioned, is to strengthen the existing value chains that include extroverted, dynamic sectors. A smart specialization strategy is already being developed in collaboration with the Secretariats of Industry and Research and Innovation.

Finally, he mentioned that the value chain of agri-food is an obvious choice, as well as that of tourism. Beyond that, industries that can contribute (such as logistics, recycling, renewable energy) will have increased funding opportunities. Sectoral policies are not an end in themselves but a means of transforming the economy towards a more competitive productive model in order to participate on favorable terms in the European and international division of labor. The "ingredients" are more or less known: business growth-synergies-extroversion-growth and diffusion of innovation-jobs.